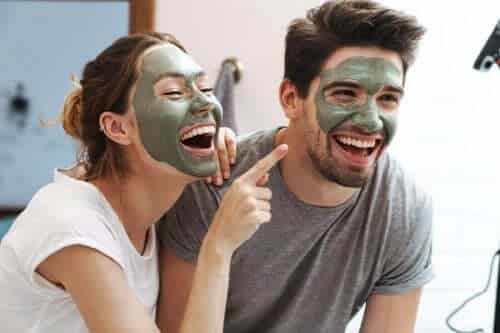 There are many different types of skin for men and women, and the management method should be different for each type.

Skin types vary by gender, but both men and women should use moisturizers and sunscreen to maintain the best skin condition. Of course, there are products for men or women on the market, but you need to know the differences between men and women and be able to choose the right product.

Men who shave, for example, need special facial skin care products. It doesn’t seem like a big difference on the surface, but it’s wise to figure out the difference between male and female skin in order to maintain the best possible skin condition.

The main differences between male and female skin

Human skin is composed of three layers: epidermis, dermis and subcutaneous tissue, and nails, sweat glands and hair are distributed.

Gender differences in skin type according to the various elements, such as testosterone acts . Testosterone determines the type of skin of the whole body, including the face of men, and men’s skin is more oily and thicker than women’s, and the aging rate is different.

7 Incredible Truths about Beauty and Makeup

In addition, men’s daily shaving habits put a lot of stress on the skin and cause different skin types.

Other differences between male and female skin

Men’s skin is 20% thicker and contains more collagen than women, so signs of aging appear late . Women’s skin usually thins rapidly after menopause, according to the American Academy of Dermatology.

Another difference between male and female skin is oil. Men’s dermis has many sebaceous glands, so a large amount of sebum is branched out than women’s, and the pore size is larger and there are many pores.

Men’s sebaceous glands, activated by the promotion of male hormones, secrete twice as much sebum as women’s, causing redness, dry skin and acne.

Men secrete a large amount of sebum and the signs of aging appear late, whereas in women after menopause, sebum secretion decreases, and the skin becomes aging and dry.

Also Read: How to Organize Your Makeup and Get the Most Out of Your Beauty Routine

Facial beards, which are mainly found in men, begin to appear under the chin and nose between the ages of 15 and 16 , and from this point on, more and more hair grows on the chest, arms and legs.

Cellulite is more common in women than men, and 90% of women suffer from cellulite. The reason why it is difficult to see cellulite in men is that the structure of the subcutaneous tissue is completely different from that of women.

According to data published in Plastic and Reconstruction Surgery, men’s connective tissue is stronger than women’s, so subcutaneous fat does not accumulate well. In women, due to the action of hormones, fat cells are larger and connective tissues are weak.

As already mentioned, men have more collagen than women and the rate of collagen decline is slower, so the skin does not sag and maintains elasticity for a long time.

Men’s skin is thicker than women’s, so wrinkles begin to appear from about 35 to 40 years old, but women’s wrinkles appear from 30 to 35 years of age.

Men have a strong tendency to develop deep wrinkles from the beginning instead of showing signs of aging such as wrinkles late. Women are more tired than others because fat accumulates under the eyes, dark circles become darker, muscle mass decreases, and the skin around the eyes sags.

There are differences between male and female skin, but both use UV rays and moisturizers, and you need to choose a product suitable for your skin condition and manage it properly.

Can You Repair The Sewing Machine Yourself?

6 Myths About Hair Care Which You Should Ignore

What to Do on a Brunch Date: Wonderful Ideas That Impress

Preparing For a DOT Audit – Everything You Need to Know

4 Common Types Of Home Pests And What To Expect When...