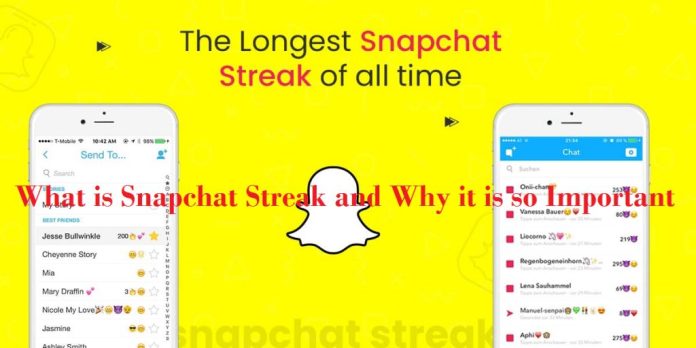 A Snapchat Streak is when two people chat with each other Three Consecutive Days sending each other Snapchats. Snapchat Snapstreaks indicated the volume of chat between two friends When they Give each other their Time.  When you see a Snapchat fire Emoji next to that person’s name it means yours both in a Snapstreak.

What is the meaning of Numbers Next to Snapchat Streak Friends Name?

Why there is an Hourglass Next to Snapchat Streak Friends Name?

When you see the Hourglass next to you Snapstreak friends name this means your Snapchat streaks is about to end. Snapchat fire emoji indicated the Snapchat streak between friends which also indicated the friendship that’s why when someone experiences Hourglass next to their friends’ name they start Snapchat back and forth again to get that fire emoji on their name. And if they don’t get that Fire emoji on their name instead to chatting with each other for three consecutive days they like to go for a Snapchat Support. You might think that these Snapchat streaks are a silly thing to report but for some Users, this means a lot.

Now Users more concern about Snapchat Streak instead of Snapchat story view of Snapchat Metric score. They take this Snapchat streak as an excuse to chat with friends.

How to organically grow your social media following

8 Tips for a Successful Bathroom Renovation

Top 6 Things to Check Before Buying a Home in 2021