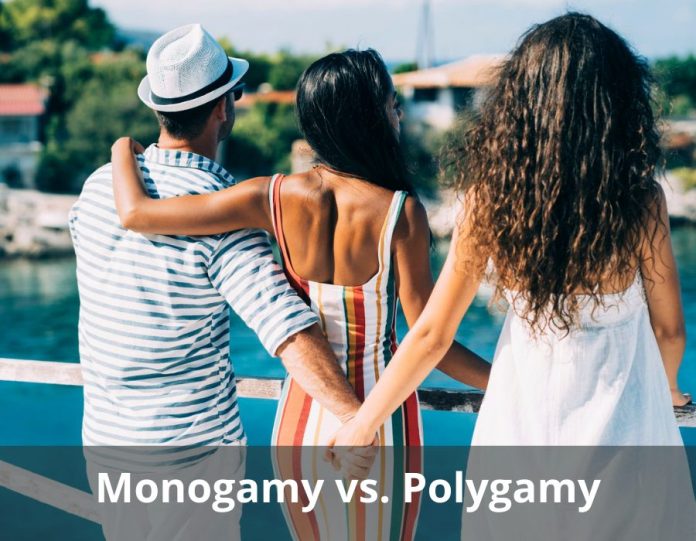 Most people just accept monogamy and question polygamy, but some people prefer polygamy. However, which one is better for health and well-being? Well, the answer is pretty complicated and for many people it actually comes down to preference.

However, there are pros and cons to be aware of. Before we get into that, what are the actual definitions of monogamy and polygamy.

What are the Definitions of Monogamy and Polygamy?

While most people have a general understanding of the differences between monogamy and polygamy, there are some common misunderstandings, and they are not exact opposites of each other.

Monogamy is a sexual relationship with a single partner. This can be in a marriage, but the definition doesn’t require it. Polygamy on the other hand is a marriage where either spouse has more than one sexual partner.

There are some other terms related to this discussion, but the most commonly heard it polyamory, which is defined as more than one open relationship simultaneously.

Societies in the modern world often shy away from discussions of polyamorous and polygamous relationships, but there are actually some positive aspects of these types of situations.

First is the freedom to do what you want without fears of limiting your emotions or the emotions of the people you are in relationships with. This allows you to do what you want, and this can be preferred by a lot of people, especially younger people who want to “play the field” or that just don’t want to be tied down to a single romantic partner.

Maybe the biggest benefit of polyamorous relationships is the fact that you get to meet a lot of new people simultaneously. This can open up opportunities to meet people that you truly want to stay with for a long time and learn about yourself as well. You will be more likely find out which personalities you enjoy spending time with as well as the personalities that you do not mesh with.

This is also a great way to build a support system. The new networks and relationships can create opportunities for friendship and professional contacts.

While there are certainly some benefits to polyamorous and polygamous relationships like freedom and growth opportunities, there are also some significant downsides.

With polyamorous relationships, there is an added factor of complexity that can lead to jealousy or resentment. It can also be difficult to keep more than one relationship to continue and grow.

Working on more than one relationship at the same time can be emotionally and physically draining. It can lead to more conflicts as well as conflicts of interest. It can also be hard to make everyone involves feel adequate and equal.

Furthermore, there is the aspect of social disapproval. In most modern societies and religions, polyamory and polygamy are not readily accepted. This can lead to judgments and isolation, or worse in some societies.

There are also mental health studies that show that the women involved in polygamous marriages have lower self-esteem and are less fulfilled and satisfied with their lives than those in monogamous relationships.

A lot of people believe that a polygamous relationship is also more likely to lead to STDs, but research indicates that is not the case. While more sexual partners would increase the risk without other factors, people who have more than one romantic or sexual partner are more likely to take more precautions and get tested more regularly which makes the rates of STDs about the same between polygamous and monogamous individuals.

Monogamy involves two people in a committed relationship with each other and is the accepted form of relationship in most cultures. There are a lot of benefits to a monogamous relationship.

In addition to emotional support, there is also financial support found in monogamous relationships, especially when marriage is a component of the relationship. This type of relationship helps those involved get more debt security and reach higher financial goals more rapidly than is likely in a polyamorous relationship.

Finally, monogamous relationships are accepted and approved by most cultures and religions around the world. This can mean a good support system and healthy relationships that are not romantic or sexual in nature.

There are some downsides to monogamy as well. First, people change over time and the couple may grow apart. The personalities may not always work well together and there is social and cultural pressure to stay together in many cases that can keep the relationship together for too long, even when neither party is happy anymore.

People may be more likely to grow bored in a monogamous relationship. These relationships are more likely to fall into a mundane routine despite offering stability. This can be beneficial in some ways, but it can also cause someone to be unhappy or feel unfulfilled.

The constrictions of a monogamous relationship could restrict individual growth. You may not have as many opportunities for new, exciting experiences or to meet new friends.

There are certainly benefits and downsides to both polygamy and monogamy and the better one for one person is not the same for someone else. Also, people change and sometimes the people who prefer polygamous relationships when they are young, decide that monogamy is better for them as they age and mature.

Marie Miguel has been a writing and research expert for nearly a decade, covering a variety of health- related topics. Currently, she is contributing to the expansion and growth of a free online mental health resource with BetterHelp.com. With an interest and dedication to addressing stigmas associated with mental health, she continues to specifically target subjects related to anxiety and depression.

How Much Does it Cost to Have a Baby by Surrogate Nowadays?

4 Tips for Getting Toddlers to Sleep Through the Night

Staying in Touch With a Close Friend Who Lives Abroad

3 Reasons to Switch to Business Intelligence!

High-Frequency Sound Waves That Reveal Images Of The Fetus

Managing Waste at a Factory: A Quick Guide

How To Create A Green Workplace Culture

How Much Does it Cost to Have a Baby by Surrogate...