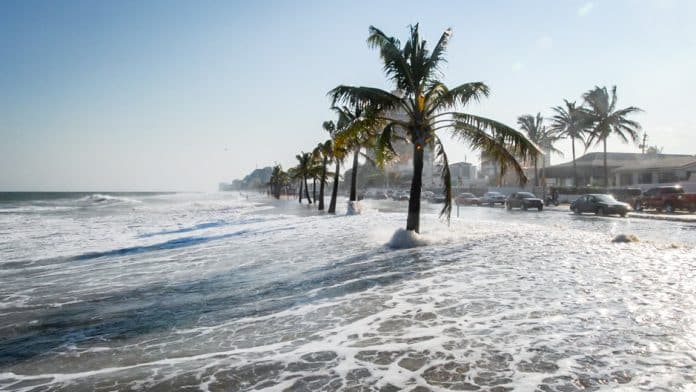 California’s vast coastline of communities and beaches is at risk due to the rising sea levels around the globe. Rising sea levels threaten California’s wildlife, real estate, the economy and millions of coastal residents. The sea levels have been rising for the past few decades due to arctic ice melt and warmer global temperatures. It’s important to understand how climate change affects the ocean and how it may reshape California’s beautiful, iconic beaches.

The shape of the most popular California beaches may be at risk with increasing sea levels. Throughout the last few decades, more beaches seem to be shrinking. Beaches that used to have large, vast expanses of sand have shrunk down to small, crowded areas. The state has committed to replenishment projects and beach clean ups for many of these dwindling beaches, but over time, the rate of beach shrinkage may increase without quicker action.

Rising sea levels may also be responsible for higher rates of coastal flooding. Flooding may happen during heavy thunderstorms and leave low lying areas near the beach vulnerable to its devastating impact. As the sea levels rise more, the threat of coastal flooding from storm surge increases. Some municipalities have invested millions of dollars in building sea walls and sand dunes to protect coastal towns from flooding. As time goes on and the sea levels continue to rise, these efforts may end up being less effective.

Climate change and its impact on the ocean may also cause coastal cliff areas to erode. There are numerous beach communities with homes built along cliffs that face the Pacific Ocean. When the sea levels rise over time, the structure of these cliffs may weaken, causing buildings to collapse. This could devastate certain parts of California’s real estate industry.

This phenomenon may also have an impact on the ocean’s tides. With sea levels rising around the world, this also may lead to higher and more unpredictable tides. A random burst of a high tide in a neighborhood may flood the area and cause significant damage to homes and communities.

Besides the impact on the look of the coastline and real estate, some people may wonder why are the oceans so important to human life. A big benefit of the world’s oceans can be found along the borders of the coasts in wetlands. Wetlands are essential to communities because they help improve water quality and maintain an ecosystem’s balance. With changes to the sea level, wetlands around the world are vulnerable to completely disappearing.

Sea level changes may also be destructive to the coastal wildlife found throughout California’s beaches. Coastal habitats for nesting seabirds, sea turtles and other creatures that make this region their home may be threatened. Animals may not be as quick to adapt to coastal beach reshaping and changes and may end up becoming confused or at risk.

The beach communities that so many Californians love and regularly visit may look completely different in the next few decades due to rising sea levels. The world needs to commit to protecting this land by focusing on climate change solutions.

Jewel Changi – The Most Unique Airport on Earth

7 Important Tips for Training a Dog

The Best Deck Paint Ideas and challenges in 2021

How to Create a Mobile App That Hooks Users