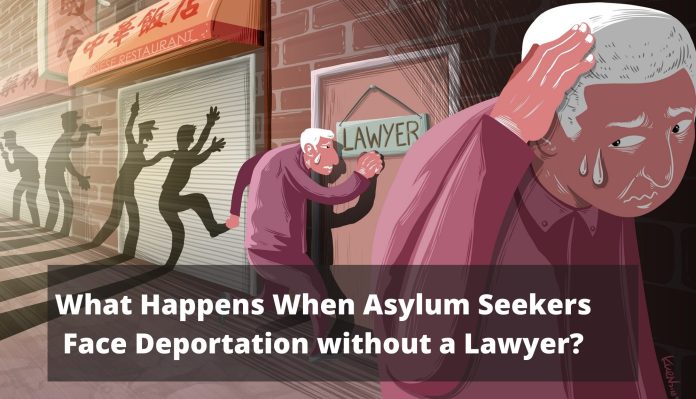 Among all other immigration cases, asylum seekers have always been one of the most complex and challenging. This applies not only to the legal representative or the lawyer on behalf of the petitioner and the seeker himself. So it is encouraged (and recommended) to have a certified immigration or asylum lawyer to face the court, most especially if the applicant requested a defensive asylum process.

The relevance of having an attorney extends to various scopes inside and outside of the immigration courtroom. From external factors such as submission of defensive asylum application, forms, interviews, instructions during the immigration hearing, what evidence needed to provide valid proof of grant, language or culture barriers between the applicant and the officials, and up to legal representation in court—these are some things that they are crucial to consider when facing such circumstances.

According to Judy London—Public Counsel’s Immigrants’ Rights Project’s directing attorney in Los Angeles—an asylum seeker has higher chances of winning the case if they have legal representatives or counseling. This would be a distressing situation for those in a scene where they cannot afford an immigration attorney and free counsel is also out of reach.

It is one to have an immigration lawyer in the first place and another to have a brilliant lawyer. Both options involve having no attorneys at all because it is never a recommendation. In 2016, the American Immigration Council had a special report under Access to Counsel in Immigration Court stating that noncitizens who have counsel were estimated to be 11 times more favorable for an asylum grant than those who have no representative/s at all (a percentile of 32 for those with counsel and 3 percent for those who do not have any).

No Walk-throughs about Removal

Asylum or Immigration lawyers studied for years to get credibility and certification for a reason. This reason is to guide the applicant in every step of the defensive process in court. When an applicant applies for a defensive asylum application, this is to defend him or her from removal proceedings (secondary to illegal documentation, forgery, and the likes).

Without a lawyer, applicants would not know how complex the deportation process works. Starting from the initial filing process, what requirements they need, what office to go to when submitting the forms and documentation, where to go during the court hearing’s designated date, and another common addition is if the applicant does not speak English. These are only a few of the factors that affect the seeker if they do not have a legal representative.

A legal representative, extracted by its name, is the overall court representation of the applicant. Given that the applicants would not know law jargon and other necessary sections and articles under the federal law (due to being a foreigner), it is a simple decision that they are not just a want but a need. This is clear during removal proceedings; in the United States, there are two phases of immigration removal, both of which require many initial steps and submissions, which might be more challenging for a petitioner who doesn’t have an attorney.

When facing deportation, it is hard to find a lawyer that can best represent you without breaking the bank. This is one of the top reasons asylum seekers do not have any legal representatives in court. Although many charities have been supporting seekers by sponsoring them with private lawyers, there is still a noticeable scarcity of asylum lawyers secondary to a lack of money to pay and slots for free counsel. This year, as a new administration runs the United States, it is best to hope for a change.

6 Common Hookah Mistakes and How to Avoid Them

4 Useful Rules for Staying on Budget in Tough Times

6 Often-Overlooked Items Every Kitchen Should Have